Blogger is a world of talented young writers, novelists, story tellers, as well as people who just want to spill their deepest darkest secrets to anyone who will read them (LOL). One of those talented people includes a young aspiring rapper from Atlanta by way of Indianapolis. I know your asking yourself, “Do people in Indiana actually rap?”, I asked myself that same question, well yeah, they do. He happens to be one of those people. I won’t write too much, but I’ve seen review after review, and said I'd rather chop it up, and talk to Dizzy Myself about Dizzyana: No Hooks.

Super Woman - Dizzy! Wassup, So I’ve listened to the mixtape and I HAVE to be honest….. I Thought it was 100 times better than any other project you’ve sent me in the past, don’t get me wrong I Am McLuvin was good, my roommate was even inquiring about your “Got her (Sweet)” joint, but I feel like on this one I got to see a whole new Dizzy. What was the motivation behind Dizzyana? And Where the hell are all the hooks? 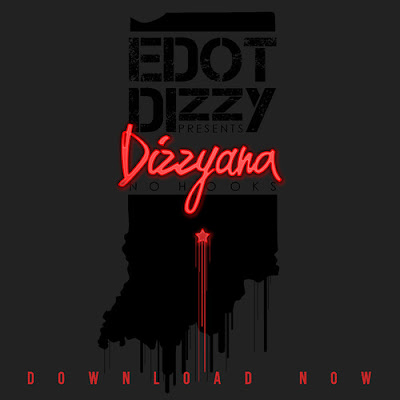 Dizzy – Well thanks for the great intro! I feel all special. Got Her sweet is on iTunes right now. But yeah this project was more of a lyrical exercise for me. Kind of like a re-birth. The hooks in the stash though. I got you. Don't Eeeeeeen worry about it. The next mixtape will be great. Its epic!

Super Woman - Lyrical Exercise, a warm up huh? Well, Dizzyana is a play on your hometown Indianapolis, what kind of reaction do you get when people ask you where you’re from and you say Indianapolis?

Dizzy – "They have black people there?" haha, I get strange looks.. Especially here in Atlanta, they don't even know where it is sometimes. They here the music and then think everyone in Indianapolis rap like me.. NOT TRUE.. Sorry! Haha!!!

Super Woman - Yeah, I was thinking more Susie and Hannah when I Heard you say Indianapolis. I heard REHAB! There seems to be some truth to a lot of the stories you tell on the mixtape, or maybe you’re just telling stories (I Love a good story). The greatest rapper ever (in my opinion); Biggie Smalls was one of the greatest story tellers to ever grace hip hop with his presence; many of his songs were true; is that the case with Rehab?

Dizzy – Yeah. Its all truth actually. I was in that situation twice. Talking to a girl and she kept being so damn insecure. Listening to her bitter friends and stopped talking me but came back trying to patch it up. I had to rap about it and express my frustration just cause I knew that both of them would hear it, haha. They always asked for me to write a song for em. Welp, I did! Haha, aren't I sweet? Don't mind me I'm buggin ha.

Super Woman - Well, they asked for it! Ha! I won’t get all E! Hollywood true story on you and ask about any drug habits, sexcapades, or one night stands you may have had, but I do have one last question; me and some of the other ladies; damn near 200 of them (Who are reading your blog daily) want to know…….Are you really that big of a freak? (Dont worry girls i got you!)

Dizzy – Lol, I get asked that question everyday. I'm a freak yeah but are all my stories about me, naw. To some extent its some truth to them. Truth and imagination. I had to stop telling sex stories because a lil girl, maybe like 14 hit me up and told me she liked it. I was thrown off by that. So I put a stop to the sex stories for a minute.

This entry was posted on 4:33 PM and is filed under music . You can leave a response and follow any responses to this entry through the Subscribe to: Post Comments (Atom) .

Downloading now. Well, it's at my house, so I won't be able to see it until I get out of school.