On her way to do her Laundry; 14 year old Lolita Gooden was stopped by a guy from around her way who also lived in Queens bridge Projects in the building directly across from her. He was known to the hip hop community as Marley Marl. He told her that he had heard that she could spit rhymes and she replied "Yeah I can, but i got to do this laundry before my mother goes crazy on me". He told her it would only take a second. She walked into his Queens bridge apartment which was set up like a studio and as soon as she heard the beat to UTFO's Roxanne Roxanne she began rhyming. Amazed; Marley Marl gave the tape to DJ Mr Magic who played it for the masses on the radio.

Roxanne Shante' was nothing to mess with bursting out of the gate with a song directed towards UTFO entitled "Roxanne's Revenge". The song was a diss song that rattled the members of UTFO, who had originally made a song entitled "Roxanne Roxanne". Little Roxanne Shante had recorded some dope lyrics over their beat selling 250,000 copies; more then they were selling for their own record. The diss eventually put her on the map. I could go into depth about the Roxanne Battles, but that's not what this post is about. Of course Roxanne was a pioneer leaving her arch enemy, The Real Roxanne to eat her dust and left a trail of emcees who she had verbally slaughtered on her way to the top, but that journey to the top was not easy in an industry of sharks and leeches.

Roxanne Shante didn't get the money that she was owed in royalty checks by her record company for the 250,000 units moved for the "Roxanne's Revenge" track and wasn't paid for most of her other work. By her second album she realized that there was alot of lies being told, and cheating going on around her. Roxanne eventually put the microphone down and decided to pick up a pen and some paper for other reasons; she decided to go to school and educate herself and ultimately become a psychologist. Roxanne Shante was a teen aged, single mother (she had her child when she first came into the rap community at 14 years old) who had hailed from the projects (Queens Bridge) and had no money, because her record company wasn't paying her what she was owed.

Roxanne Shante had enrolled in school after reading a clause in her first music industry contract with Warner Music Company which stated that the record company would pay for her education for the REST OF HER LIFE. Roxanne didn't fight for the royalty checks, but she was damn sure about to make Warner Music pony up the money they had promised her for her education. Getting the money was like pulling the teeth of the executives over at Warner Music. They tried to make excuses and dance around the fact that they had included that clause in her contract.

Eventually, like she did in her rap battles against many talented MCs, Shante had prevailed and was granted $217,000 eventually graduating with her PH.D in psychology from Cornell University.

Dr. Shante now owns her own Psychology firm. Her work is aimed at the African American urban community who she says stigmatized therapy because they thought that it would label them as 'crazy'.

Ladies, as well as gentlemen trying to gain entry in the hip hop music business (Key word being business) need to take notes and pay attention to their contracts like she did. Though she triumphed, there are alot of young people who are on the radio now, or who WERE once on the radio who were not being treated fairly. Get them contracts checked. 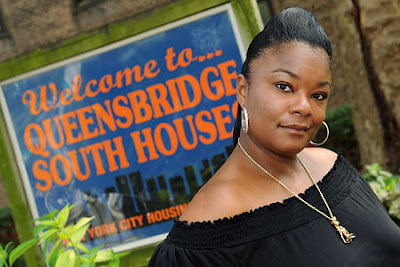 "I told Dean Grecco that either I'm going to go here (college) or go to the streets, so I need your help".
--Roxanne Shante

(Hell yeah I wrote this no copy and paste)
This entry was posted on 11:56 AM . You can leave a response and follow any responses to this entry through the Subscribe to: Post Comments (Atom) .

finally a blog about stuff worth reading... other than these other blogs..

GLAD 2 SEE SHE MADE IT... IT IS DEFINITELY A SHADY MUSIC BIZ... AND ITS A SHAME HOW THEY TREAT TALENTED ARTIST...

OH SHITTTTTTTTTTT .. THATS CRAZY HOW U WROTE A POST BOUT THIS .. MY MOTHER RIPPED AN ARTICLE OUT THE NEWS PAPER 2DAY ABOUT HER FOR ME TO SEE !!!!!!!! MY MOTHER WAS LIKE - U SEE SHE'S A RAPPER AND SHE WENT 2 COLLEGE AND BECAME A DOCTOR .. I WAS LIKE OK MOM .. AWWW !! CANT WAIT TILL WE MOVE IN ROOMIE AHAHA !!!

that song she had with biz was mah shit!...cool bio i heard that keke palmer is supposed to portrait her in an upcoming bio flick....

Well they talked about PUSH for a long time too, they finally made it into a movie. Let's cross our fingers.