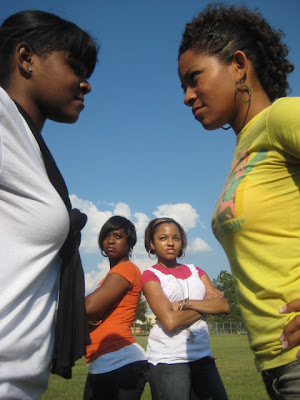 "Let go of my fucking hair Kenya" I said angrily. She held and yanked on my long rope like ponytails. I thought the hatred she had was because of my hair, that hung on the sides of my face like the ropes used to hang my ancestors from the willows that wept for them.....not just her ancestors, but...

Her hair was short and brushed neatly into a ponytail, and picked out into a puffy ball, like a little black cloud sitting directly above a brown earth. (That last line, about the brown earth went over your head.... didn't it? Ahh 5%)


It was my first day, of second grade, my friend Ray Ray had just taught me how to curse, and how independent and 'grown up' it would make me feel. The first time I had ever went to "Real school"

She then maliciously regurgitated words, that I knew were not her own, "You think you cute? Little yellah bitch, you ain't shit. I ought to cut this shit clean off your head". My grandmother would kill me, that was for sure...

"I'm not playing with you Kenya, I WILL FUCK YOU UP!" I angrily yelled, now hyperventilating, sweating profusely through my yellow uniform shirt. My eyes silently threatened her friends who held me down, making it hard to fight. Larette brought the scissors and placed them in Kenya's outstretched hand, sneering and hopeful. Hoping that Kenya would make good on her threat.

I closed my eyes, as tears drummed from behind my pupils, begging to be set free, but they were slaves to my ego.

I wont tell you what happened that day, because whether Kenya cut my hair or not isn't important, what happened in the years to come was...

I hated to walk down the streets and hear the cat calls of hustlers who were recruiting young girls in the summer to be bottom bitches. I cringed every time I heard the word "Yo, Let me holla at you light skin"

The streets of NY were intense in the 90's and early 2000's. The ignorant stains that the drug epidemic of the 80's had left behind were eventually called children. The children of the crack era, victims of what my criminal Justice books labeled "A Victim-Less crime" A.K.A the offspring of Queens, or should I say crack whores who kneeled before our fathers; Kings...King Pins I should say, who took advantage of the weak. So young men, didn't know how to be young men Not quite understanding that 14 year old girls were not to be dated by 23 year old men with lust in their eyes and bad intentions covered by lullaby-like words. No father figure, no one told them. They were ignorant,I thought. I knew better

I sighed as I walked past Baisley projects, in South Jamaica Queens as a boy I called "Charlie" yelled out his window, "Yo Light skin, when you gonna let me holla at you Ma?" I sucked my teeth, and whispered to myself "fuck you". Then he yelled "Light skin YOU KNOW YOU HEAR ME".

Most of my life, I despised the intruder known as my skin as it tagged along everywhere I went, like a younger sister looking up to her older sibling. "I'm not light Charles, I'm brown" I yelled up to him, weakly smiled and crossed the street. "Nah ma, I like 'em light, like me. We could make some pretty babies" ...

Knowing it would never happen, he cursed me venomously and angrily yelling "Stuck up Bitch, you ain't all that fine anyway" from a 4th floor project window.

I was 14, he was 23. Why the fuck would I care about children, and why would I curse them with the curse I had walked around with attached to me my entire life?

I had denounced my skin color verbally to him, and mentally denounced it years ago in a 3rd floor public school bathroom. I wanted to be the rich Mocha of my twin sisters, and on the same end of the spectrum as my Father and Mother.

Where did I come from?

In a coke induced daze, I believe my mom said that the man whom I thought to be my father wasn't. Her words were slurred, and I was just a baby, but she declared that I was indeed the offspring of a John. I asked if his name was John, since she called him that. she said 'No, he's an Italian man, with no name'.

At that age all I could think about was his clean canvas. A man with no name, free to be whoever he wanted, especially since he had no child to care for. Maybe his name was Eric, Tony, Louis, or whatever, but I knew it wasn't John. I wish I had no name.

Living in a house full of Chocolates, from milk to dark, I constantly tried to prove myself. Eating watermelon until it looked like I was as round as a ball at family gatherings, demanding fried chicken for dinner, reading Malcolm X and roots at 10 years old. I eventually, somewhere in between the books and stereotypical behavior lost my self. Little Mulatto; I called myself. Something Alex Haley had taught me on one of my many visits to the library.

Eventually I got over it, I got over the fact that I would never be the hues I had dreamed of being at night. I accepted my phenotype.

I just want my darker sisters to realize that because you are the color of our ancestors...

Don't be discouraged. Through your own insecurities, you have created the insecure lighter sister, who is always trying to prove herself, who eventually stops trying to kiss your ass and becomes the indignant, cocky creature that she is in her adult years. Who thinks she's better because she's light, because you've drummed it into her head for years. Willie Lynch is still a factor in your life, and you are still a pawn on his chess board.

ok sis, so, i was layin down when i read this and i HAD to sit up to respond to it...man, i always felt the same exact way...at one point, i absolutely loathed my light skin color..of all my cousins n most of my friends at all my schools, i was the lightest one and even still to this day, whenever someone from my past refers to me, i'm the light skinned girl with the pretty eyes and not my actual name..it used to bother me bein called, yellow girl, light bright, clear, shii anything that indubitably identified my skin color...i'm rambling lol..it's ridiculous that this is still even a discussion or a battle..there's enough racism n segregation without us self segregating with labels (ie light skin\dark skin) smh nice post ma

I'm not quite sure when the time came when I accepted my skin color. All I know is I was tired of being "cute for a dark skin girl" or having to be mixed because I have "good hair" I was tired of being cute but my friend cuter because she was the light skinned one. I had to realize some of these ignorant ass statements were fueled by something and instead of me getting pissed and sad about it at night..my skin color wasn't gonna change. So either I had to accept it or hate myself for the rest of my life. Obviously I chose to accept myself and ppl are still ignorant but I no longer pay them any attention..unless of course they get in my face..its my right to slap the shit out of them and say "dark skin power" lol I kid. But I love ALL colors. Seriously! And I loved this Shenda!!

I receive flack for being light skinned all the time. Especially at my job. A few team members actually told me that they don't like me because of it. I've been told by a few women, "your too light for me". A friend asked me did it bother me and I realized I never really took offense to it because at the end of the day, I'm Black and I love my Blackness and black self.

You are also the color of our ancestors. This debate is something that rages on from here to the Afrika cause our ancestors Black, White, Red, Brown and High Yallah all endured it. Yet, you can choose to BE all this and beyond! I can see by your blog you made the right choice.

Hope to see you in the chat tomorrow (8pm eastern)! =]We're discussing and debating it all out. Be there to set the record straight!

We LOVE all that you have to say here on your site =].