Suspect Guys and My Denial 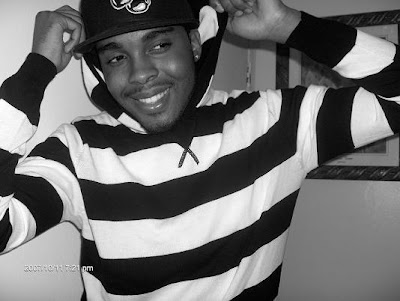 Have you ever stopped and admired someone. Like, just sit and look because they seem almost like the perfect specimen. Really cute. So BAM! how about i was on myspace (which is really rare, and everytime i go on i have a weird story like the one about herpes and lies) and some boy posted some weird shit on my comments. Im guessing it was one of those retarded spam messages (If its called spam, i thought spam was like some kind of pork thingy).

Im like wow, he has some really great skin, love the hue, color, and everything. SO! i go to his page and Tamia "Cant get enough of you" comes on. In my head im like wow thats kind of suspicious but im sure guys listen to Tamia too, but to have that as his profile song raised a flag....half staff. 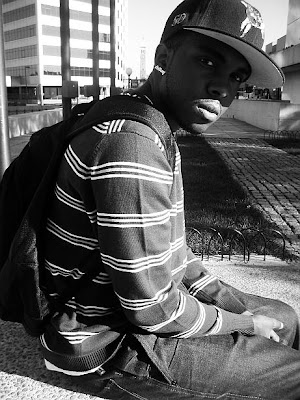 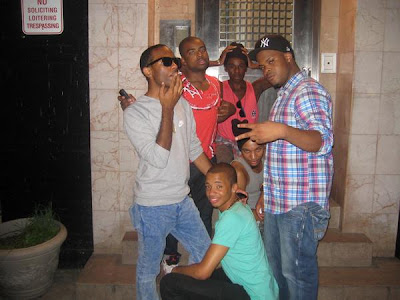 I continue and realize that in one picture he's really close to some guy, who's behind him, and like....hugging him from the back

BUMBACLOT!!!!! What part of the game is this? I have no choice but to assume he's ...homosexual. I have nothing against them, at all.... but why you?

THATS NOT WHERE IT ENDS!!

So i continue through the pictures (Still in denial) and come across another cute guy, hispanic, and it says me and my dude. So my gaydar is starting to make a ruckus but im in denial. And then ....BAM!!! The next picture is the spanish guy doing what looks like a dance and the caption says "Get It baby". Then i see this: 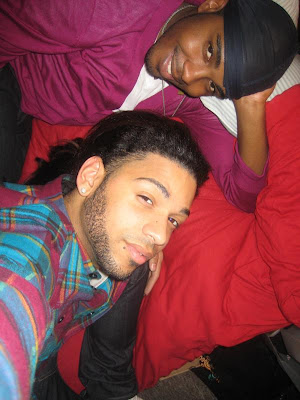 OH LAWD NO PLEASE NO!!!....So Now...No more denying it. Well, one good thing came out of this, he can definitely dress which helps me realize that Kanye's Little "I get my fashion sense from the gays" comment has been proven true.

This entry was posted on 11:25 AM and is filed under fashion, gay, here we go again, Kanye West, why . You can leave a response and follow any responses to this entry through the Subscribe to: Post Comments (Atom) .

Wow. Normally I would attempt to leave a paragraph long comment (because I don't wanna annoy you lol. Just kidding) but there isn't really anything I can say here. I mean, like you, I don't have anything against homosexuals but I feel like you did when I'm talking to a female and she turns out to be straight lesbian. Again, I don't have a problem with homosexuality but its killing me that everytime I try to talk to a female, she turns out being a lesbian (^o^)<-----*Mr. Heartbreak screaming "nooooooooo"*

.. And didn't you have another post like this a lil while ago? About a dude you liked being day?

Not all good-lookin dudes that can dress are gay, Shendy :-P

@Dom I dont think ALL of them are gay...these two just happen to be FLY.

And yeah i did post that, however i actually knew that guy, I've only seen this guys myspace profile, and he didnt try to date me about 4 years ago LOL.

Why soon as I saw the way he smiled [ll] I knew something gay was gonna be going on?

I crushed on my bf of 9 yrs, he was so handsome, great prsonality always knew how to make me feel better, but we were best friends. I was supicious of him b/c he was a tad soft, but you know we were in high school. So I'm grown now and I came across his myspace page and he's looking all scrumptious. I notice that Mariah is his background, okay he's always loved her and Aaliyah.
Then I notice his orientation is missing, my sister says a straight man would never leave that out, but like you...in denial.
So I go through his pics and I'm looking like hey, they are all so well groomed and awfully close to each other in these pics. Again, not thinking clearly, so I happen to see he has a video posted and it called whine it back or bring it back something like that. I click on it thinking it's some chicks. Well the first move is this person with thick hair popping and twirking and doing things with their hind parts that I didn't know was even possible.
So this person turns around and its a man. Then 2 other obviously homosexual men start grinding and dancing all over each other and I cut the video short. I could not believe my eyes. I was more upset that he never trusted anyone to tell us. But deep down, I always knew, I just never could admit it. Yes he was always shhhhaaaaarp!

At least you dont have to worry about some next flimsy inadequate bitch getting him .. smh .. this was real funny shen shen

LMAO!! That happened to me before....I hate that shit

damn sis, that shii has happened to me a couple times too..it sucks hardbody...ughhhhhhh and a lot of the times it's always the cute ones huhhhhhhhhhhhhhhh lol

first off S weezy i'm gon kick you! *glares* you're never online so a bitch can't im dat ass Vallouisfury@aim *pouts* grrrrrrrrrr bk sit da fuck down for a sec and let me holla atchu
:0)i've missed you! so you know i got to go through the archives and see what i've been missing *sighs* now on to important shit... umm maybe my journey cross the rainbow cloud seeking my lucky charms have enhance my gaydar cuz i beeped soon as i saw his glossy ass lips in the first pic ________________________flatlines you aint peep the lip glass? you slippin ma.... den the second pic screaming "come tickle me a lil" hold up why the fierce squad posing a la vogue DEAD!!!!!!!!!!! and lastly ummmmm... the last one *scratches head* needs no elaboratin' but he fly as fuck doe lol *chuckles* imma need to call Tom to control your myspace eye hustlin lmaooooooo enjoy your day sunshine!!!!- pro

I`ve actually NEVER had that happen to me.. I`d def be mad pissed tho.. Kind of funny in a '09 way cuz it seems to be the new thing.. *shrugs*

lmao..girl i read this from my phone i dont think i've ever laughed so hard...

man theres been a few dudes that were way too cute and i didnt wanna believe certain things about em..but what can u do when that shit smackin u right n the face

lmao, i loved scrolling down seeing the rainbow get brighter and brighter with each picture. all i can say is "owww"? lmao. funny post.

lol... all the signs were there, theres a difference between being suspect and just being guilty. lol

but we all know it aint happenin'...

I'll just walk away and wonder why ....and leave it at that

ahh what a damn shame.
It's always the cute ones too.