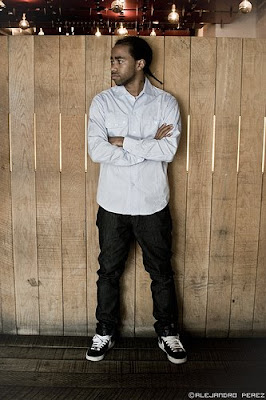 Not too long ago I gave a VERY talented dude one of his first interviews. A humble, nonchalant dude, who called himself wordspit; who rocked doobies (NY slang for a wrap) that even I, myself was envious of. I still to this day would like to take a trip to the hair salon and get my hair done with him while we chat about Brooklyn Hip Hop royalty such as the Notorious One and Thee God (Biggie and Jay). You can say whatever you want, and throw whatever jabs you'd like at him about his very unique style but you can NOT deny his talent.
I believe in the kid, his talent, and what he's doing. I'm obviously not the only one who enjoys his music because he's graced websites such as Two Dope boyz, XXLmag.com as well as numerous other blogs. SO I urge you to take a listen to his new joint off of his upcoming mixtape entitled "The coolest B-Boi Stance". I haven't listened to it yet (Due to technical difficulties AKA my Laptop hasn't been feeling well) but there's no doubt in my mind that he lives up to his moniker "Wordspit, The Illest".

"Its Not a Joke This Year" - Wordspit

Be looking for Coolest B-Boi Stance dropping across the Internet and HERE on August 24th.

This entry was posted on 9:07 AM and is filed under music, wordspit . You can leave a response and follow any responses to this entry through the Subscribe to: Post Comments (Atom) .

ok so my comp is actin funny but when i get a chance to sit down n fix it i'ma definitely check the kidd out..i'm always down for a fresh sound

Now, I like the guy and his little song, but what's up with the suspenders, man? Why do we have to accentuate nerd stereotypes, b? That's like a black dude posing with watermelons.

Just because the hook uses "Forward, Down, Quarter-round, Fierce", he's won a fan.

I recently came accross your blog and have been reading along. I thought I would leave my first comment. I dont know what to say except that I have enjoyed reading. Nice blog. I will keep visiting this blog very often.