Posted
Most Hip Hop artists are locked
in contracts where they spit straight pop
instead of liberating minds of little girls who pop... gum
and lock lips with dicks to taste brighter futures that may never come

Who do we blame?
Brief Intermission: You Maaaaaaddd (I had to do that). 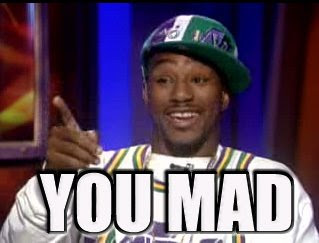 Cam is the King Of Ignorance Lol.

Back To Our regularly Scheduled Program:

When I was naive I thought gangsta shit was cool. I wanted to be Fifty, well maybe not Fifty, because he got shot way too many times, and bulletproofs are expensive (I checked). I'll settle with the original First Lady Of G-Unit; Scarlet (Yeah I'm Young, when G-Unit first hit the streets of south side I was In Junior High school, I'm in my early twenties now). Yeah, Scarlet was first, and unless you were a G-Unit fan before 'Get Rich Or Die Trying', you wouldn't know that. She rapped about shooting niggas, and getting her goons, way before Remy Ma. Wait, nah, Remy was thugged out on that 'Ante Up' Joint, before Scarlet was on 'Elementary'.

That's not the point, the point is children are gullible, and rappers should take more responsibility for the things they say before they point their fingers at the parents. They're just as much at fault. Yeah Cam, we maaaaad. Your more mad though. I've seen you and your not looking like your old self Killa, You fell off. Imma watch Paid In full Tonight.
This entry was posted on 12:03 AM . You can leave a response and follow any responses to this entry through the Subscribe to: Post Comments (Atom) .

i agree! these rappers (some of them) do wild out wit the lyrics!

Yep, we have to hold rappers more accountable for what they say. Especially mainstream cats. Not saying they can't rap about it but it should be more than "this is fun gangsta/fuck bitches/get money" rap

You right, Cam is the king of that ish. And I remember Scar. I don't like it when girls are ALL thugged out, not cute. Keep it cute. She was like a man with a pussy.

Cam is terrible. The present cam is just depressing to look at.